‘Ad Astra’: How Cinematographer Hoyte van Hoytema Made the Moon and Planets Avant-Garde

With “Ad Astra,” director James Gray (“Lost City of Z”) has made a father-son “Apocalypse Now” in deep space, in which astronauts Brad Pitt and Tommy Lee Jones square off like Willard and Kurtz in the heart of darkness of Neptune. Good thing that Gray went on his celestial cinematic journey with Oscar-nominated cinematographer Hoyte van Hoyte (“Dunkirk”), who is currently shooting his third movie on large format film with Christopher Nolan, the intricate thriller, “Tenet.”

“When I first met Hoyte, he said, ‘I’ve never seen a film of yours. Are you any good?’ I said, ‘I don’t know — maybe you’ll tell me,'” Gray said. “From that moment on, we were very honest with each other. I wanted the technical know-how of ‘Interstellar’ but wanted something very different, so Hoyte and I decided to do a deep dive into a much more avant-garde cinema and also a lot of different work with color.”

But the director admitted that you have to cheat a little with physics. “First of all, on Neptune, the sun basically looks like a large, bright star,” he said. “You have no light out there — it’s completely dark. Still, what you try to do is establish some kind of plausible light source, some plausible idea behind the light. I’m always distracted when I see lighting that isn’t plausible.” 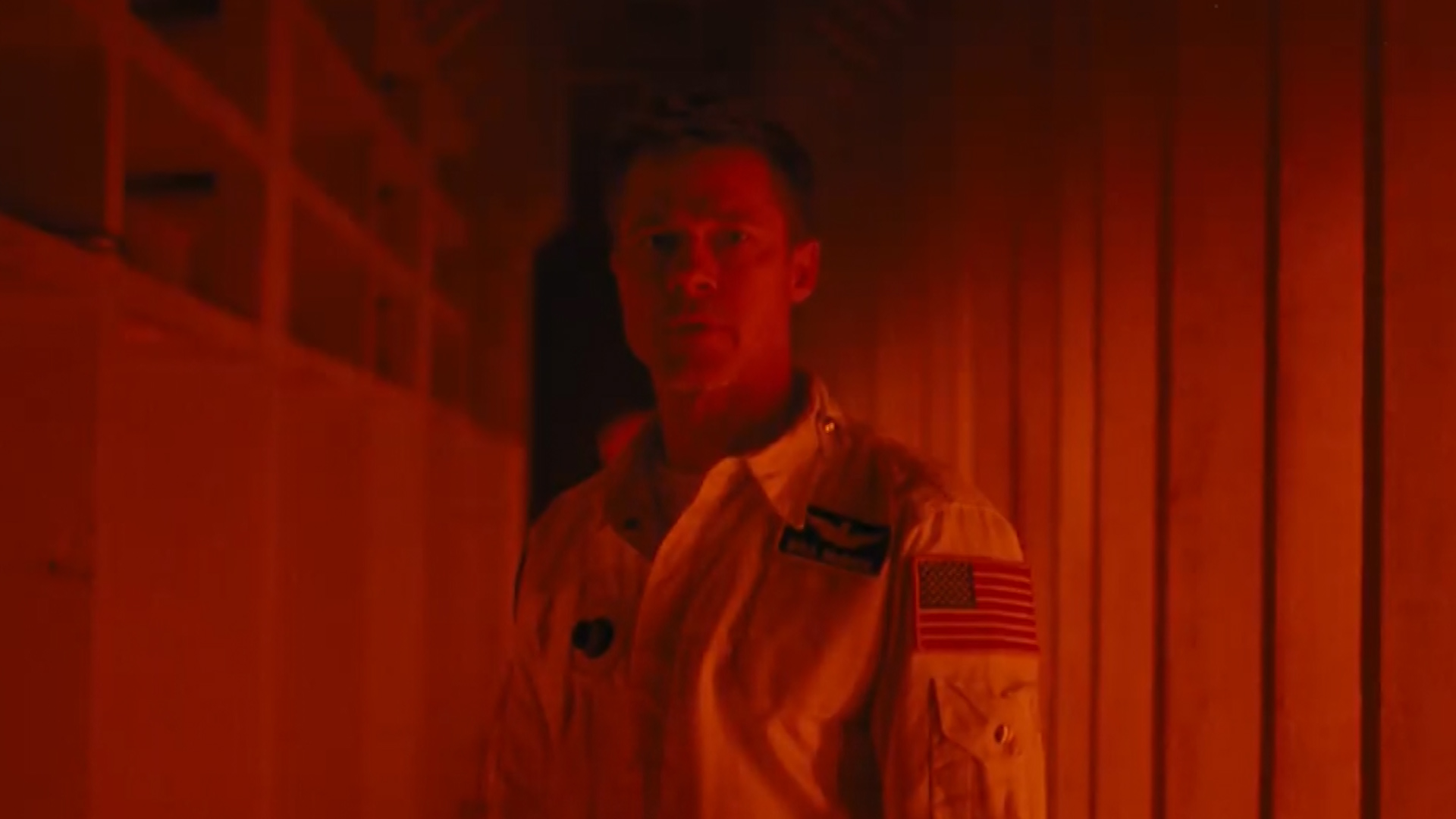 However, van Hoytema — who shot “Ad Astra” primarily on Kodak 35mm film with Panavision cameras and lenses — didn’t have any interest in repeating what he had previously accomplished with “Interstellar.” “To a certain extent, I am always trying to come up with something new in my own eyes, but work methods are like tics,” he said. “One gravitates towards what feels safe, so I have to constantly keep kicking my own ass and question my motives and reassure that I am not choosing the path of least resistance in my photography choices.

“I do believe that this film has a whole range of original concepts that deserve their very own reference of judgement. Opposed to many other works I had done before, we had a very clear timeline connected to the lighting of the film. The visual language wanted to be in sync with [the] distance traveled through space [2.7 billion miles] and Brad’s state of mind. The physical distance from the sun was an important element in the lighting design. Not only in intensity, but also in color. Light as we know it, close to the sun, here on earth is rich in spectrum.”

But, as Pitt traveled to the outer reaches of our universe, the frequencies of light became more singular. Colors gradually dropped off the spectrum, too. “Artificial/energy deprived light would start overpowering the natural as we progress,” van Hoytema said. “That was one of the reasons that Mars has this orange sodium feel to it. We wanted to make it feel like an incubator, as a signifier that it needs human effort and constant artificial generated energy to sustain human life on this outpost. Neptune is dim and blue…hardly any full spectrum sunlight reaches this far, apart from the blue and ultraviolet wavelengths, combined with tired practical low energy artificial light sources.”

It took some experimenting, though, to bring that awareness of changing light going farther into deep space, or even to achieve the concept of light itself as a source of life. Thus, van Hoytema played with the concept of “materializing” the light in terms of physics and atmosphere. He had “Astra” lenses custom-built without the protective coating to add softness and a halo effect to the image. This, in combination with their crystal spectrum prism, literally created any color of the rainbow flare.

Meanwhile, the biggest challenge was the thrilling lunar action sequence: a battle/chase with Moon Rovers shot in Death Valley under the supervision of second unit director Dan Bradley with stunt doubles in suits on motorized rovers (with van Hoytema shooting closeups of Pitt and the other actors in a black stage in LA). “We felt we needed to play with frame rates in order to approximate the motion of a vehicle moving in low gravity,” he said. “I think we shot the entire sequence somewhere between 32 and 36 frames-per-second to replicate lower gravity in the motion. By adding a bit more slow motion, adding lag to the impacts, we felt it matched the Apollo footage better. Of course, it gets a bit harder to create a high octane chase, by slowing the elements down, but, again, the credibility of the motion really created something never seen in a conventional chase. Tension wouldn’t necessarily come just from speed, but more from the fucked up physics and the story itself.”

But the moon battle took a lot of thinking and conceptualizing. The closest reference point they had was the “For All Mankind” documentary about the NASA Apollo program. “The rover is bouncing around in 0.1654 G on the surface of the moon, lit by virtually unfiltered hard sunlight firing through the atmosphere-less air,” said van Hoytema. “Our challenge was the inability to light up a big area with a single light source. We needed to cover enough distance to be able to shoot a ‘car chase,’ but double shadows or soft light would be a big giveaway. Doing all in CGI would have been boring, and usually doesn’t look convincing enough in a film that is effectively shot mostly on real film. We wanted to maintain the quality, feel, and texture.”

They came up with an ingenious solution. Van Hoytema’s friend Kavon Elhami, who runs a camera house, helped him to buy two decommissioned 3D film rigs on which he could mount two cameras. “One was a customized Alexa infrared camera and the other was a 35mm camera,” he said. “Instead of lining these cameras up with their usually 3D parallax, we found a way to line them up overlaying each other perfectly. So each camera is effectively shooting the exact same shot, one on infrared, the other on film.

“The infrared camera is only sensitive to a very specific wavelength of light…it will dramatically darken your daylight sky. Shot in natural sunlight, with a slight contrast boost, it will result in images that are brightly lit; however, the skies will be dark, even in helmet reflections. This way, when shooting in a desert that resembles the moon surface, you will get a step closer to the lighting character on the real moon.”

The disadvantage of infrared, though, is that it has a very limited color spectrum, so the images come out black-and-white. That’s where the second 35mm camera came in handy. “In the perfect overlay, it contains all the color information and texture needed to complete the final image, by compositing these two together,” van Hoytema added. “There was naturally a big amount of CGI involved in this sequence as well, under the supervision of Brad Parker, but the very idea that we delivered images to post that had the right texture and feel was very important. We were stoked how close we could get our images to what we had seen from the Apollo missions, On set, Brad Parker really embraced the concept of doing as much as possible things for real, as a solid ground for post.”