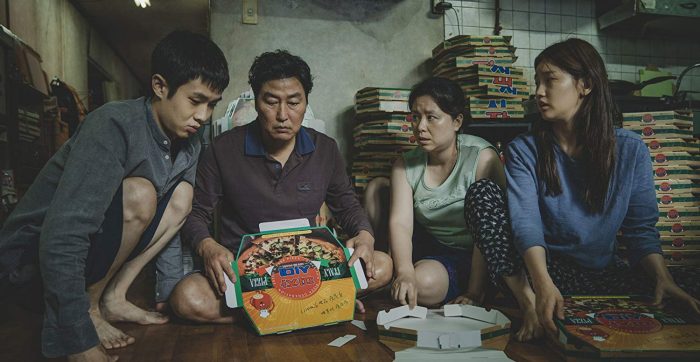 In my review from Cannes I described Bong Joon-Ho’s Parasite as “a film that unabashedly takes the audience along for a twisty, twisted ride and gets under your skin. With mind-warping shifts in tone and storyline, there’s a feeling that you’re getting more bang from Bong than in a dozen lesser films.” I continue to believe that “it’s a mighty work from a mighty director, and a master who schools the world on how a film like this can be so deftly pulled off.” The jury shared my feelings, awarding the film the prestigious top prize, the Palme d’or.

Months later, my acclaim for the film has grown even higher. I somewhat facetiously wrote for its TIFF premiere that if you really don’t like Parasite it’s incumbent upon you to watch it again. There’s such a purity of vision and precision of craft that it’s easier to find fault in viewer rather than the work itself. It’s that rare movie that truly can, and should, transcend mere discussions of preference. This is a major work, and to argue otherwise seems more than a bit churlish.

It was thus all the more of a pleasure to sit down and speak with Bong during his stay in Toronto. I asked questions in English and he’d reply in a mix of English and Korean (aided by his exceptional translator), and for we discussed the many ingredients that go into making a film like this work.

Our conversation has been edited for clarity and concision.

You must be thrilled with the response the film has received as it has travelled the world after Cannes.

The film was released in Korea, France and across Asia and Europe, and next month it’s going to be released in the US and Canada, so I’m very excited. The response in Toronto which has been great – I heard that they’ve added another screening of it at the festival!

It’s exciting but at the same time, as I’m a very hard worker, so I just keep doing the same thing. I’m actually writing a script in my hotel room and on the airplane.

How has your own relationship with the film has changed based on how it’s been responded to?

My actor and I watched the film again in Toronto a few days ago, with a Canadian audience.  It’s a very special experience, but the movie looks the same in a good way. It still has its core.  So whether it’s screened in Canada, Europe, or Australia, I felt that the film still keeps its original universal core message that it delivers to the audience.  It also keeps making me think about my next film! It’s quite strange, but when I’m watching in some specific moment or sequence Parasite almost keeps pricking at, making me look at certain scenes and think that in my next project this element will be different in some other way.

I don’t really think about how to mix all of the different elements.  I just boil the soup. I’m not a bartender who’s like, oh, this much of gin, this much of rum. I just constantly smell the soup and boil it.  For example, just in the middle of the movie, when we meet the other parasites, the door rings with a “ding dong”, you know this is a very crucial moment. It changes quite rapidly, I agree, but this is something really happens to humans. I never think that of that moment as before the film is some kind of comedy, and after I’m shooting in the horror genre. I never think like that.  Everything is just really happening to those characters. My actors are familiar with my approach so they maintain their own weight and tone throughout the film. Eeven when the lighting suddenly shifts to the horror genre, or the feeling and story, changes, they just continue on with their performance, with the weight that they carry.

Do you ever shoot in sequence?

No, it’s always very mixed.  In Snowpiercer the first day of production was the shooting of the last scene of the movie outside the train!  [laughs]

That must make it even more of a challenge to maintain the specific tone.

It’s complicated, but that’s our job. Me and my actors, we are all professional.  I don’t think there will ever come a time when we can shoot in sequence. I heard that for Land and Freedom Ken Loach actually did shoot in sequence. But we have very limited budget and schedule so we have to be very effective. It’s something that can be overcome as long as you maintain focus.

Are there other films or stories that you’ve tasted that go into the soup?

I’m not the type to read a lot of novels, but I love watching films from other filmmakers and I’m also a huge fan of comic books and graphic novels. I love to take my time appreciating photography as well.

The bad version of your film is that you have a movie, and then there’s a twist.  M. Night does this all the time. It’s a boring movie and then the twist and suddenly you’re supposed to think it’s a good movie.  Your film is the opposite of that. When you’re tasting soups of cinema all over the world, what is a good soup, and what is a sour soup?

[laughs] You have to take your time boiling the soup.  I don’t think my films are films about films. Some directors do that, but that’s not what I do.  I think my films are about humans. I’m really interested in humans around me. I don’t have a lot of friends, but I do have a lot of interests and I’m observing humans.  That’s what I like. Sometimes with the characters in my films, I look at them cynically, but most of the time I have a lot of compassion for the characters, even with the villains. I try to show the basic amount of compassion to them, between myself and my own characters in the film.

The film is beautifully specific and local while speaking to an international audience.

I think everyone felt this, but because the story of the gap between rich and poor and polarization can be applied to any country across the world in our age, I felt very certain that I could comfortably and freely add very Korean details and still maintain that universal core, like the details of the Taiwanese cake shop and the Ram Don. These eerie, unique details of Korea I felt like I could be bolder with including them.

Are there more parasites around you thanks to the success of this film?

[laughs] Maybe my movie is my parasite.  It’s growing up inside me, my brain, my body, and in some moment it’s gown up and up and [he stands up and gestures violently] I yank it out and throw it on to the screen.  It’s my parasite in Toronto!

The post ‘Parasite’ Director Bong Joon-ho on Walking a Tonal Highwire and His Reaction to the Film’s International Success [Interview] appeared first on /Film.

Sorta Like A Rock Star: Netflix Rounds Out Cast For New Musical Movie

[Exclusive] 6-Minute Featurette Takes You Behind the Scenes of Shudder’s “Creepshow”!

[Exclusive] U.S. Rights to ‘A Nightmare on Elm Street’ Have Reverted Back to Wes Craven’s Estate